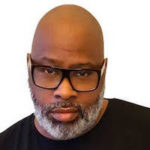 Rheji will appear on the Poetry and Songwriting panel.